Inspirational
|
What Did God See? 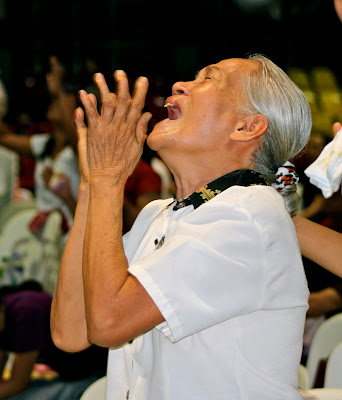 It was more than hot, but I don't know another word to use to describe it.

It was close to 100 degrees inside the smelly gym in some inner bowel of Manila that even the bus driver had gotten lost trying to find. It had rained and the smell of wet dogs, wet bodies, and wet wood was everywhere.

Truth be told, I was a little aggravated.  The 20 of us had traveled all day long on day ten of a two-week stint, our praise team had stripped their voices and made themselves sick trying to sing on a ridiculously broken sound system, the preacher had preached his heart out to a congregation that couldn't even understand him for the most part and I thought my ears would bleed from the horrendously loud screeches coming out of the left speaker. The right one was blown, so the sound engineer in all of his wisdom thought he could make up for it by blowing the left one. Which was right by my ear. And I would risk offending others if I moved and would risk my life if I went outside. So I sat. And wondered why in the world we did this to ourselves.

Why in the world did we travel 10,000 miles and eat food we didn't really like and wear ourselves out and get so hot that the walls waved and the room did a little dance and then have maybe every fifth word understood by the audience? And leave feeling sick and weak and ineffective?

Well, I for one was tired and getting a gargantuan headache from the ridiculous speaker to my left and my foot was hurting where I had fallen the day before and injured it.

And I was baking in heat not fit for humans to survive.

And in all my miserable attitude, I glanced up and saw her not three feet in front of me.

She was in front of the same speaker and the temperature was the same. She had to have been tired, because her hands told the story of a woman who had to work hard every day just to survive. She didn't show the heat as much, because her body had adjusted to it, and her clothes looked fresher because they were made of some cheap fabric that wouldn't wrinkle.

But she didn't have an attitude about any of it. She had come to worship and nobody was going to stop her.

I doubt she understood the English. I imagine the bad sound was pulsating through her brain, too. The smells were the same beside her as they were beside me.

But it didn't matter.

She lost herself in praise and thanksgiving.

She smiled at God and was beautiful.

I watched her and asked forgiveness.

And I worshipped, too.